Of course I’m reviewing this. Are you kidding? It has my name all over it.

One thing I’ve learned as a pastor is that when you go deep enough in a soul, you invariably hit a chord that twangs hard. So I believe the split-decision and ongoing debate over the merits of Batman v Superman: Dawn of Justice is because director Zack Snyder dug deep into the soul of America and got his hand nearly bitten off. 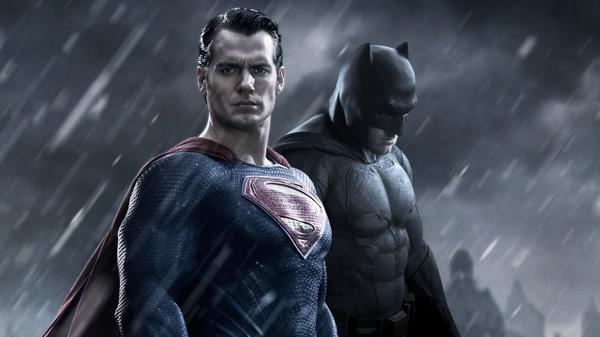 The fractious political debate we Americans are currently in, plus the threat of terrorism and the mixed blessing of our southern neighbors building lives within our cities without being official citizens, has made American’s anxious and defensive.

Many citizens want to see compassion done for the marginalized while others are demanding justice for those who have used that grace – and Federal mandates – to overtake our society. [Please note I say “overtake” as in “going faster than you”, not “take over” as in a “controlling you”.]

Batman v Superman touches on all these points in an epic way, showing the innocence of Superman [Kal-El] who, as an alien, can act any way he chooses without government oversight versus the angry wealthy financier who sees his very city and his business destroyed by “his kind.”

This shown in the first three minutes of the film, and if you didn’t get that, you miss everything. This is not a piece of fiction; this is commentary.

Manny Popoca has written his review of BvS, and although he’s my Perry White, like Clark Kent, I don’t see it the way he does. I see it far more as an operatic piece with iconography, far closer to an epic fable by Terrence Malick than an intellectual film by Christopher Nolan. Snyder cannot do what Nolan does. Thankfully, with this material, he does not have to.

The genius of Batman v Superman is in the lack of dialogue, of tight plotting. It is in the trading of exposition for visual reveals, which is Snyder’s strength. There are long stretches of visions, dreams, nightmares and flashbacks with prophetic future visions that demand the audience know the DC Universe and accept that terrible things are coming if Superman goes bad. Batman is born of hell on Earth. Superman is born of heaven and came to Earth. Conflict is inevitable, and so are our cultural wars.

I think the Big White Elephant in the Room problem with Superman v Batman is that it had to follow a well-done animated universe, a classic graphic novel and a highly-cherished film & TV history. Zack Snyder and crew simply could not give us something new, but he could generate a Wednesday’s Child of it – a dark child born after the events of September 11th and filled with portent. He had to show an adult version of the heroes, not the children’s version nor the teen’s version. So in our Zach-verse, Batman has been fighting evil for twenty years, Superman for two and Wonder Woman two hundred or more. They aren’t out to inspire anyone. They are there to stop evil and save lives, not be our ideals. Even Superman “saving a kitten out of a tree” from the first Reeve’s film is mocked by our dark knight.

That difference and making this film the origin of Lex Luthor [yeah it is] shook all our expectations up. It made us a bit unhappy to see Mark Zuckerberg as Lex Luthor – no matter how perfect Jesse Eisenberg was as a psychotic, charming man-boy genius. [Are you implying Lex Luthor would create Facebook? Shame on you! I love my kitty cat memes!]

We older fans also hate our comic knowledge turned over by the latest most popular version. I mean, where’s the respect for what I read forty years ago? I wish I could go on, but you are tired and I have made my point.

Zack Snyder did not fail us. We merely failed to appreciate what he gave us.

Wizard World continues its 2016 schedule with its sixth trip to the Greater Columbus Convention Center at Wizard World Columbus, July 29-31. The three-day event will feature some of today’s […]

Netflix in November looks to keep kids entertained, families gathered, and lot of bingewatching ahead! For Netflix Originals, which have a proven track record of success, November sees the releases […]