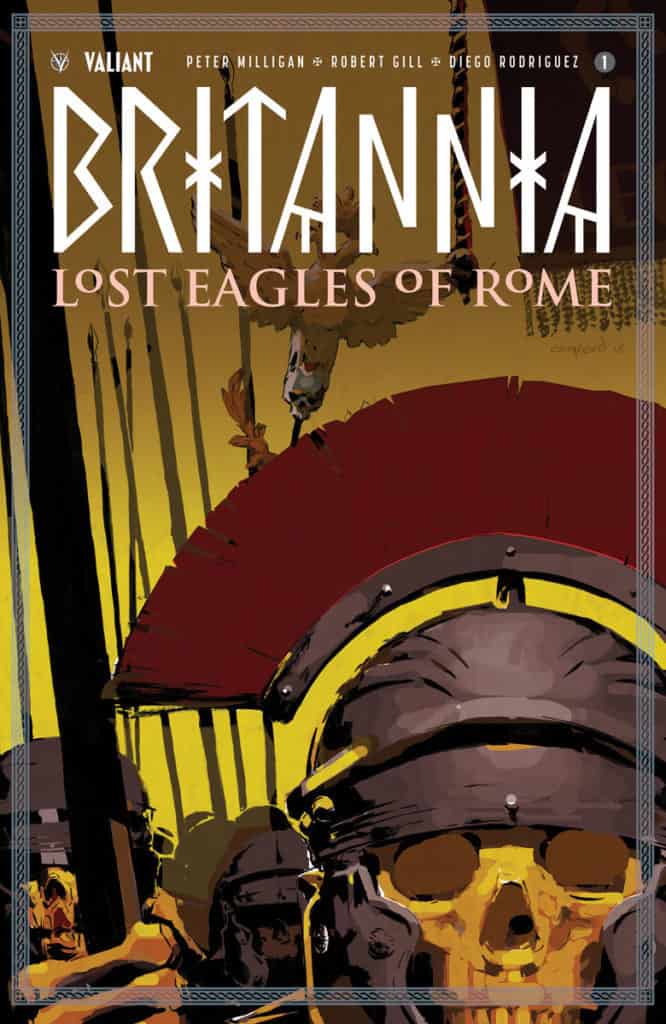 BRITANNIA: LOST EAGLES OF ROME #1 – Cover A by Cary Nord BRITANNIA: LOST EAGLES OF ROME #1 – Cover B by Brian Thies What can I say? I have been a huge fan of Valiant Comics since they debuted with Magnus Robot Fighter #1 back in 1992. I stayed with them till the bitter end and then with them through the abysmal Valiant/Akklaim Universe. After that ended with Unity 2000, there had been some small attempts to revive the company but nothing took. After losing the rights to some of their more popular licenced characters (Magnus Robot Fighter, Solar, Man of the Atom & Turok: Dinosaur Hunter, to name but a few), Valiant relaunched itself in 2011 with X-O Manowar being their flagship character. Granted this all-new Valiant which has taken the comic industry by storm might not be my cup of tea and I do have issues getting into some old fan favorites…sometimes something so unique and interesting comes along, I just have to try it. So when a copy of this month’s Britannia: Lost Eagles of Rome came across my desk, I was champing at the bit to read it and give my whole nickle’s worth.

Britannia is a story set in the farthest of ancient times when the world was still young. Set in 65 A.D., the story focuses on Antonius Axia, a Roman centurion who becomes the “First Detective” during the times of Emperor Nero. He is know as ‘The Detectioner.’ The first arc was a four issue mini-series. This was followed up by another limited series, Britannia: We Who are about to Die. Now we havbe yet another series to feature our earliest detective, Antonius Axia, Britannia: Lost Eagles of Rome. The first two series have been written by Peter Milligan and art by Juan Jose Ryp, so you have a complete maintaining of flawless continuity from one series to the next. Peter Milligan, while not a headliner, has some decent experience in his back pocket. His first real mainstream works were for DC Comics. He helped bring the revamp of Steve Ditko’s Shade, the Changing Man into the modern era in the 90s for DC’s Vertigo imprint. He also succeeded Grant Morrison on Animal Man, as well as Detective Comics. Milligan helped seed the idea of Azrael, who went on to become the new Batman during the mid 90s. It wasn’t until 2001 that he made headlines with his work on the X-Force/X-Statix series which helped pave the way for destroying the Comics Code of Authority. His more recent work includes Justice League Dark in 2011.

Given his background for the macabre and offbeat stories, it’s no wonder that Britannia was one of his concepts. Each series is much like a Sherlock Holmes case, and Lost Eagles of Rome is no different. Imagine a good Poirot mystery but with magic and the occult thrown in. Lost Eagles of Rome is a story about theft. The golden eagle standards of three of Rome’s best Legions have been stolen by rampaging barbarians. It is up to Antonius Axia to track these pieces down. He is accompanied by his trusted friend Bran and the beautiful, yet deadly, Achillia, who was introduced in the second series, We Who Are About to Die. Together, they have to seek out these missing standards in the dark heart of the Germanic forest of Tottenwald. What this issue does, and it does it well, is establish a bit of foreshadowing of what is to come. Nero’s reign is beginning to unravel. He’s losing his damn mind and it’s begining to show. He fears his time as Holy Roman Emperor may be coming to an end and it’s a form of irony which Milligan uses for, if you know your history, all this is transpiring a year before Nero allows Rome to burn in 64 A.D. Nero was painted as the antagonist of the first story and wasn’t too well-painted in the second. This leaves one to infer that either this series is going to end badly or there will indeed be a fourth series to come.

What I do find compelling with Britannia is that Milligan takes advantage of the freedom he has to play with history and tweak it for the current Valiant Universe. If you don’t count Aric of Dacia, the Viking Visgoth abducted from his home time of 408 A.D. and then displaced in the present as X-O Manowar, then Antonius Axia could very well be one of the earliest Valiant heroes next to the Immortal Anni Padda Brothers: Gilad (The Eternal Warrior), Aram (Armstrong) and Ivar (The Timewalker) who were all around at almost the dawn of time.

The use of magic and fantasy is very subtle by Milligan in the series overall, so I would expect no less from Lost Eagles of Rome. If you enjoy ancient history, then this book is indeed for you! Again, the part I hate in a review of a book. Robert Gill comes to us with a pretty diverse and great resumé of both mainstream and independent work. He’s done a lot for Valiant in the past as well. While his work is good, it doesn’t grab you. It almost looks as if Valiant is trying to form a sort of House Style with their art work. Most Valiant art can be hit or miss, but Gill continues to hit it out of the park with keeping the look and feel of Ancient Rome in synch to Juan José Ryp’s earlier work. It makes you feel as if Britannia is just an ongoing series, and instead of an issue 1 with Lost Eagles, you’re just reading issue 9 of a continued series. This series delivers! If you like mystery and a bit of Cthulhu-style investigative horror, then this book is for you! Again, Milligan has crafted a great ancient parallel to Sherlock Holmes, which is fantastic! In today’s age with the BBC’s Sherlock and America’s Elementary, the tale of a modern-day Holmes was becoming rather boring. So here you have Antonius Axia is Sherlock Holmes, Bran is his Doctor Watson and Achillia is very much the Britannia version of Irene Adler. What is even more compelling is Emperor Nero serves as an amalgam of two Holmes characters. One would be Mycroft Holmes, as Nero is constantly assigning orders and missions/”cases”, to Antonius while he acts as a sort of Professor Moriarty, always making moves which can make both life and the solving of a mystery hard for Axia. All these aspects make Britannia a cake of excellence and Lost Eagles of Rome is yet another slice of that cake.

Coupled with all that similarity or homage (take your pick) to Sherlock Holmes, you have the real life history fast encroaching. I’m anxious to see if Milligan will take us to see Rome burn at the hands of Nero and if so what would the world’s first detective, ‘The Detectioner’ do about it all? Not often do I find myself with a page-turner from Valiant Comics these days. Also, I have not enjoyed a miniseries since The Book of Death. I only wish we could see more of Antonius Axia and maybe have him intermingle with other aspects of the Valiant Universe. The only drawback to most of Valiant’s publications is their obvious fear to expand their comic line. They seem to revolve around miniseries and events, aside from a handful of main titles, but in comparrison they are really small which may be economically sound in today’s roller coaster industry.

BRITANNIA: LOST EAGLES OF ROME #1 can be purchased on comiXology
and at your LCS and online retailers beginning Wednesday, July 25th!