A bloodstained new beginning for Valiant’s enduring and iconic tragic hero starts here on September 20th as Bloodshot and his daughter, Jessie, set out on a revenge-fueled mission of villains, violence, and vengeance. Now, to mark the coming of Valiant’s next essential, adrenaline-fueled monthly series in the wake of the chart-topping success of X-O MANOWAR (2017) #1, the publisher can now reveal its complete and consistent breakdown of covers spanning BLOODSHOT SALVATION’s first year: 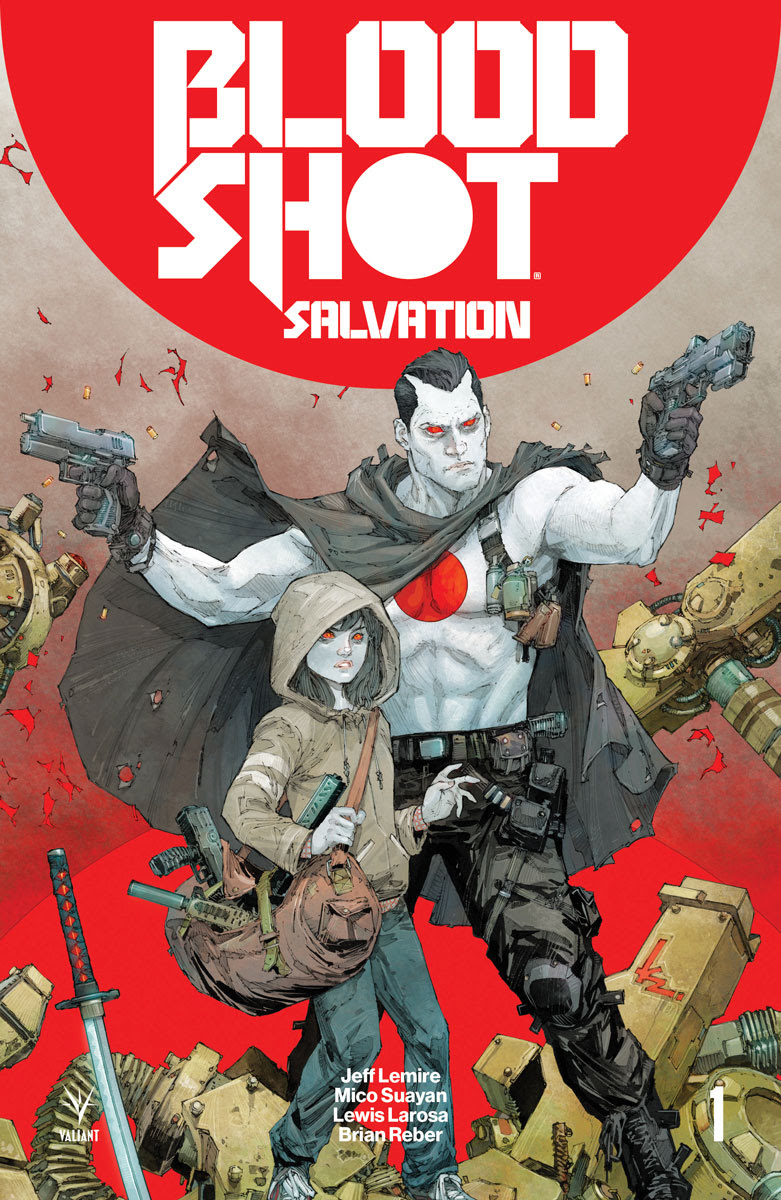 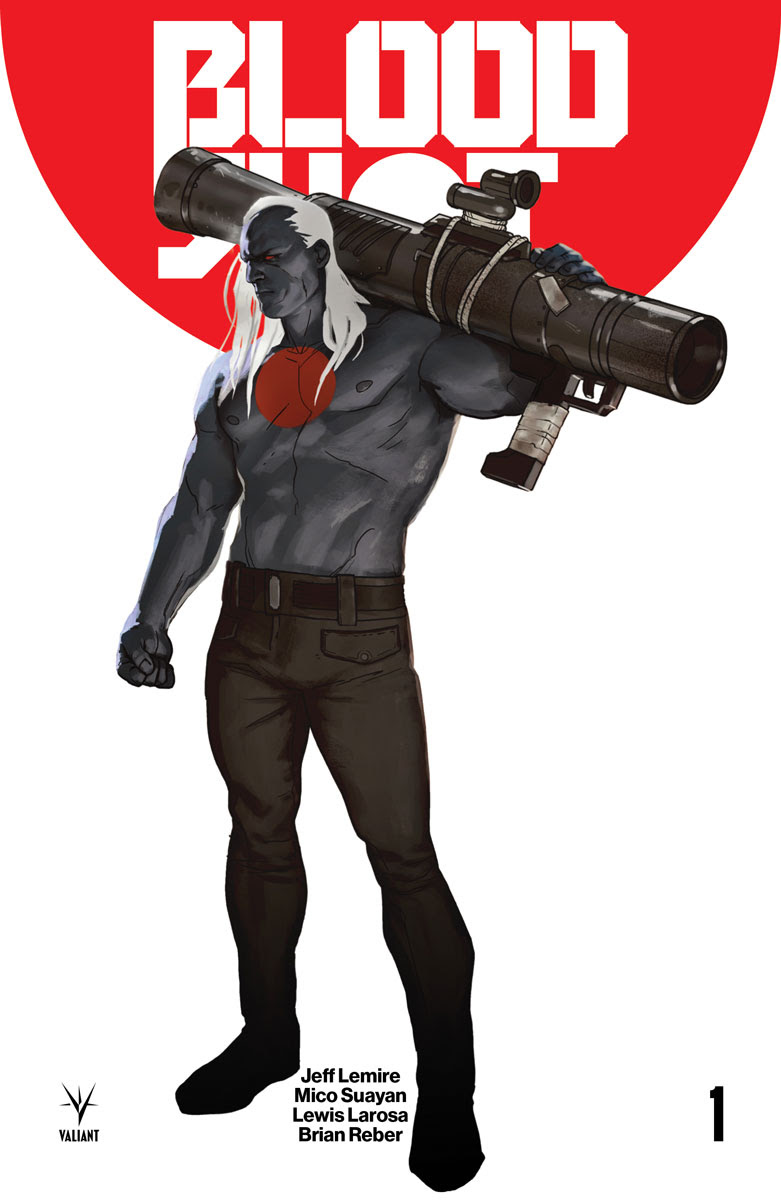 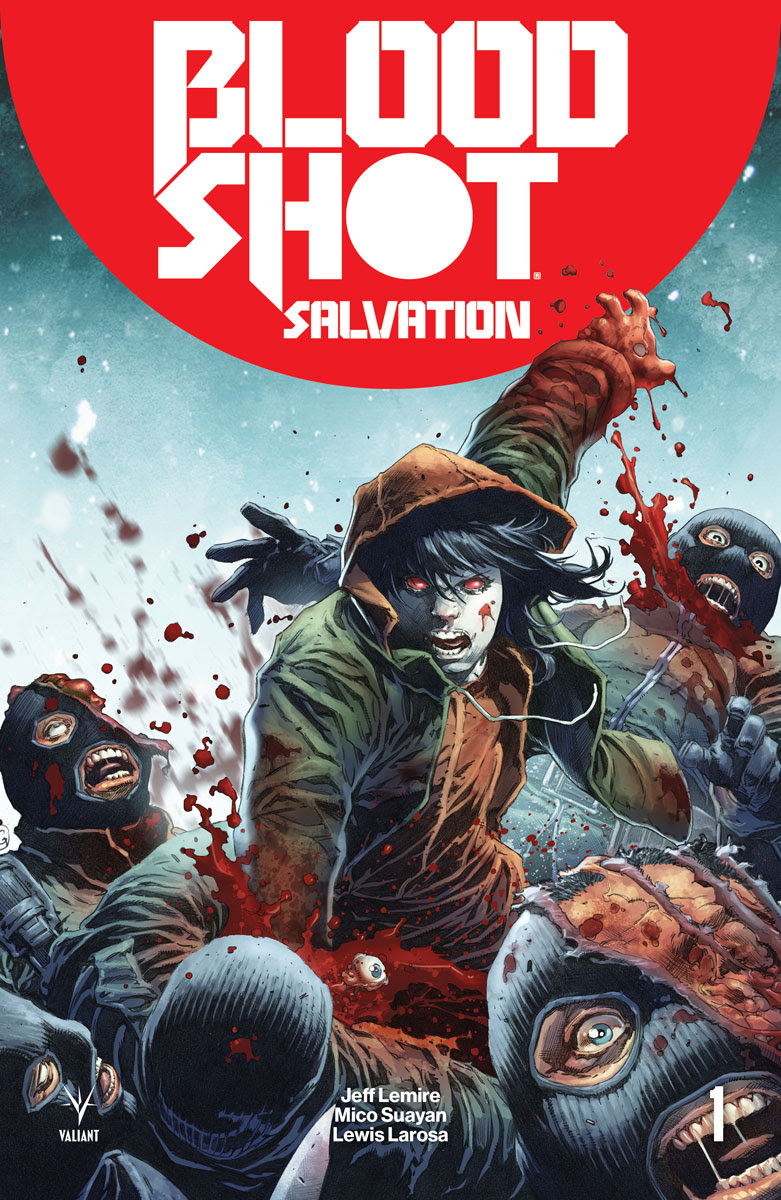 Witness the raw power of BLOODSHOT SALVATION’s fury firsthand as a new artist steps up each and every issue, beginning with comics powerhouse Tomas Giorello (X-O MANOWAR) to spotlight Bloodshot and Jessie’s most punishing confrontations 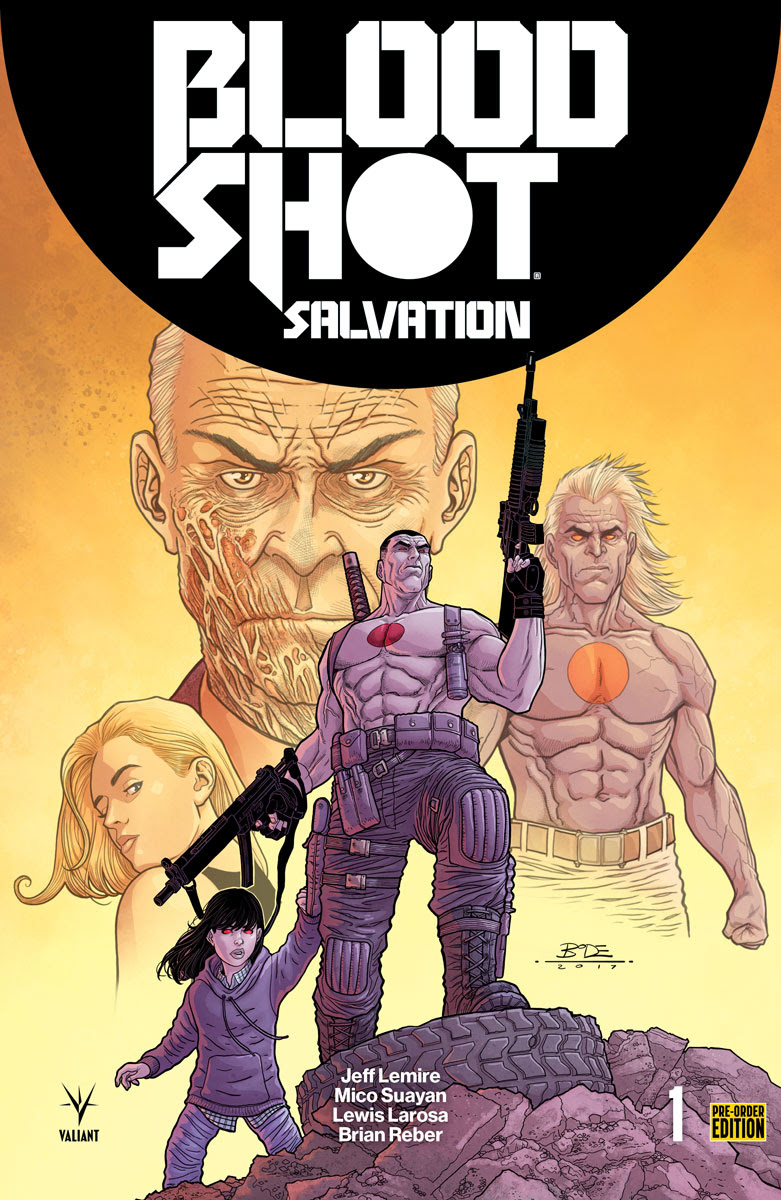 Available only as pre-order set! Fans who reserve the complete first year of BLOODSHOT SALVATION with their local comic retailer by July 27th, 2017 will receive these hyper-detailed covers by Ryan Bodenheim (The Dying & The Dead), plus eight pages of extra-added content with each issue and the BLOODSHOT SALVATION #1 RAMPAGE REDUX exclusive bonus comic. 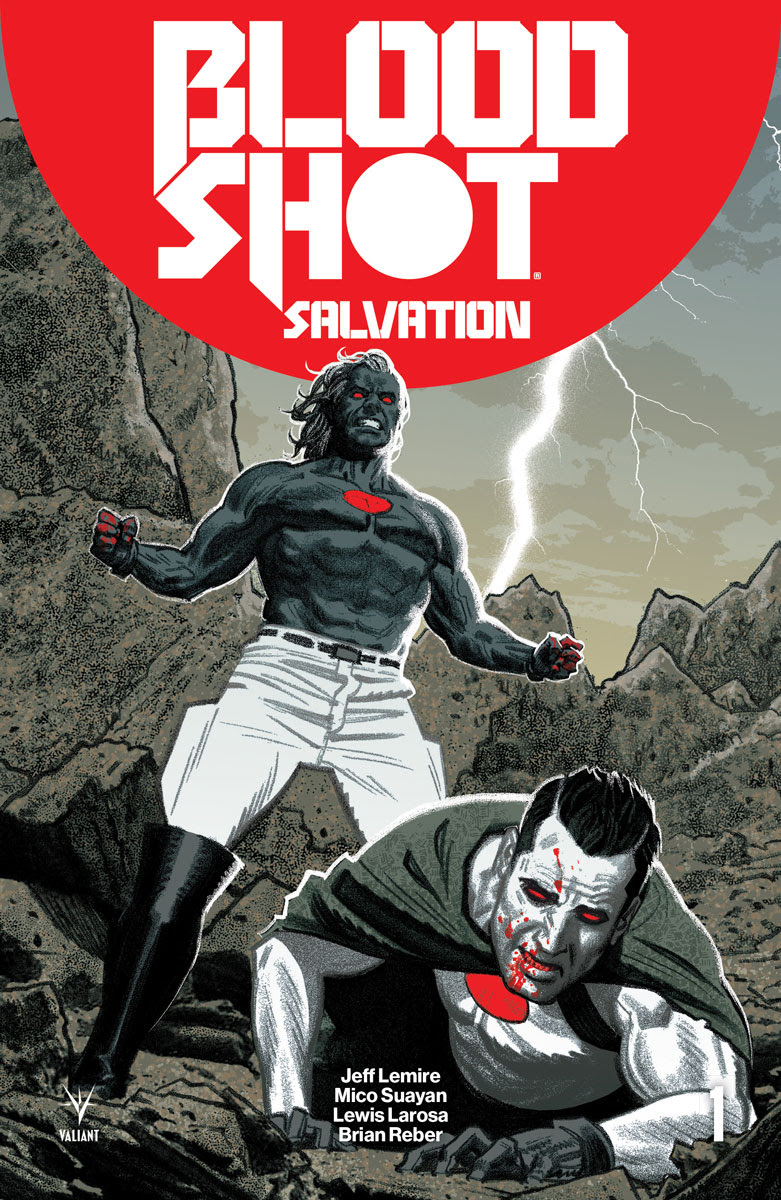 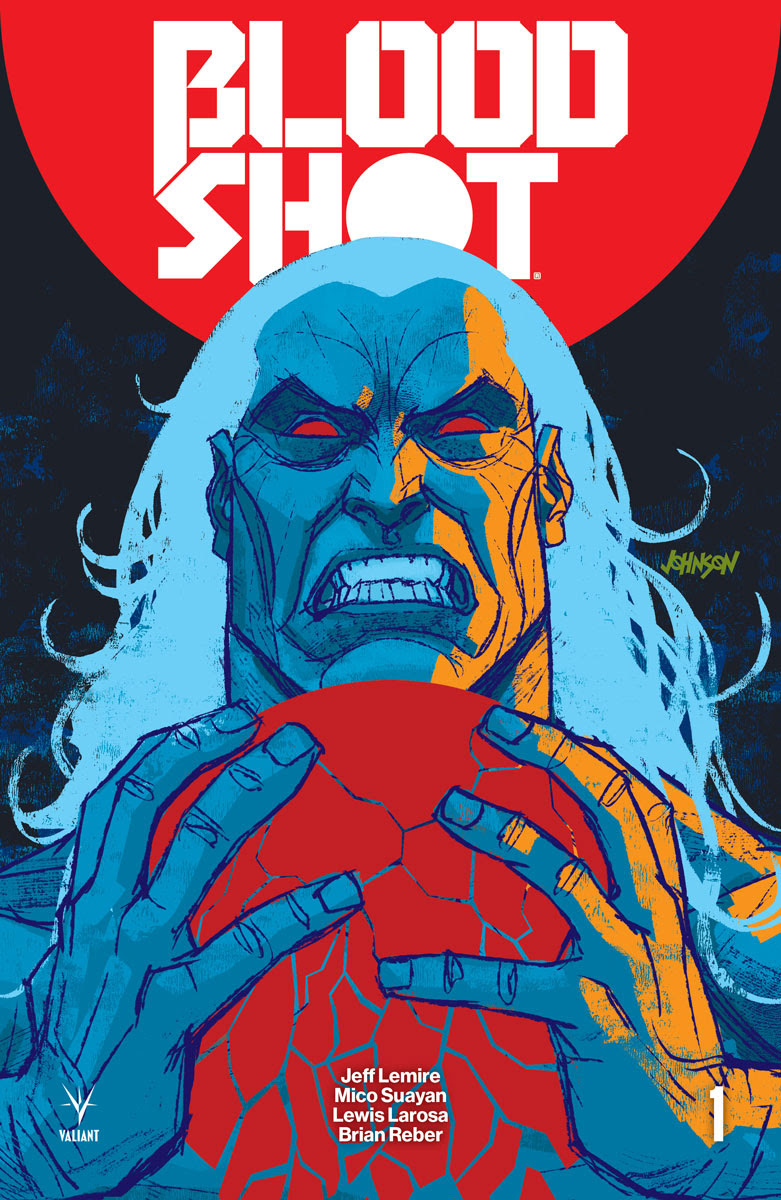 Bloodshot meets the industry’s greatest talents head-on in a new series of high-end variants for each and every issue,
beginning with Eisner Award-winning artist Dave Johnson (Superman: Red Son) 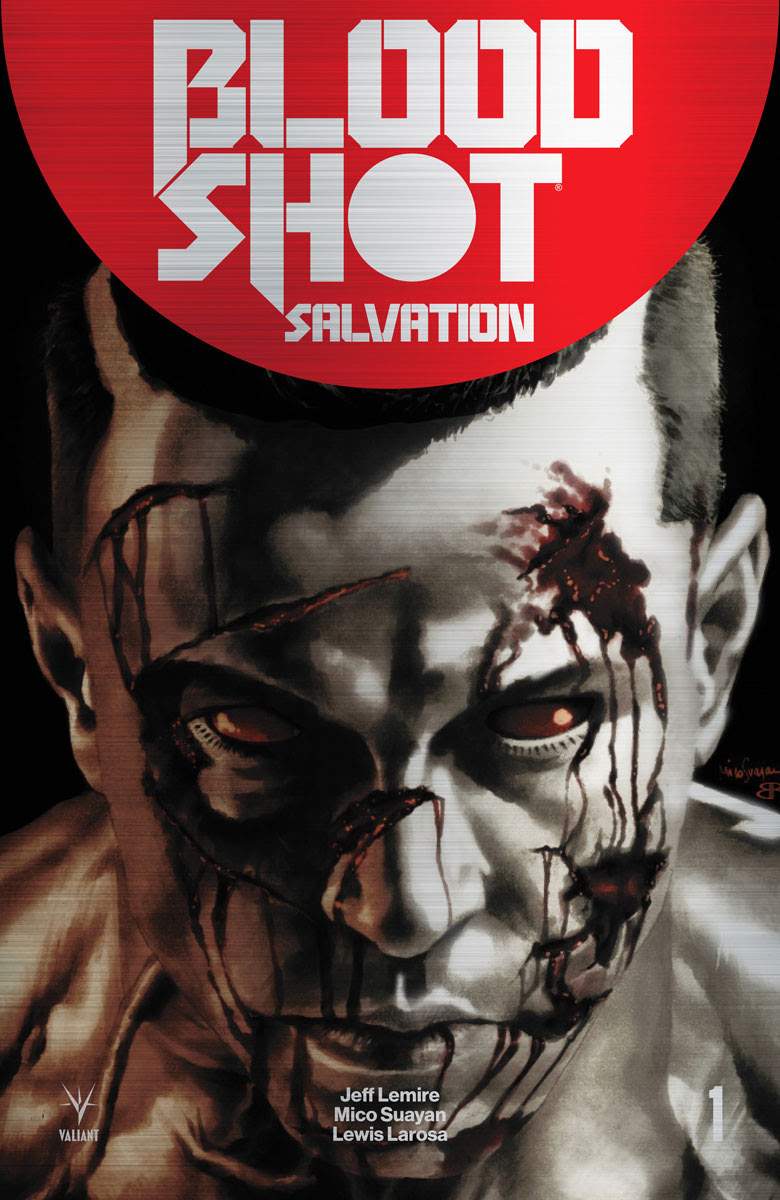 “Earlier this year, we set out to reinvent the industry’s approach to covers by creating a consistent and easy-to-understand strategy behind each of our biggest series. X-O MANOWAR (2017) #1 was the first to benefit from those efforts, and our revamped cover program worked to great effect in communicating the new series’ biggest points of interest to fans and retailers,” said Valiant CEO & Chief Creative Officer Dinesh Shamdasani. “Now, we’re applying that same careful logic to the launch of BLOODSHOT SALVATION #1 – Valiant’s most important new series of the fall and the heartbreaking opening chapter of Jeff Lemire’s latest Bloodshot epic. Each cover in this series reflects a specific element of the book itself – from Jeff’s insidious new cast of villains to heart-stopping action sequences – and features contributions from some of the greatest talents working in the medium today.”

Attention retailers: For instructions on how to qualify for each BLOODSHOT SALVATION #1 cover, please refer to the Diamond Retailer Site or contact a Valiant sales representative directly at sales@valiantentertainment.com.

From New York Times best-selling writer Jeff Lemire (BLOODSHOT REBORN, Moon Knight) and extraordinary artists Lewis LaRosa (BLOODSHOT REBORN) & Mico Suayan (BLOODSHOT REBORN), a bloody and vengeful new era for Valiant’s Eisner Award-nominated Bloodshot saga begins this September as Ray Garrison escapes his violent past to build the one thing he never thought he’d earn: a family. But when a hateful secret from his true love’s past threatens their fragile peace, Bloodshot will be forced to run headlong into a barrage of blood, bullets, and broken bones for a revenge-fueled assault that will have crushing consequences for those he holds most dear… In the wake of X-O MANOWAR (2017) #1, the next great Valiant ICONS launch of 2017 starts here on September 20th in BLOODSHOT SALVATION #1 – an epic and essential turning point for Valiant’s unstoppable soldier! Across 2017, look for FAITH AND THE FUTURE FORCE, WAR MOTHER, ETERNITY, NINJA-K and QUANTUM AND WOODY! to join the ICONS line-up with major new series as the largest independent superhero universe in comics gears up for a major leap forward. On September 20th, the fate of the Valiant Universe’s hard-fought hero runs red as Jeff Lemire, Lewis LaRosa, and Mico Suayan ready a revenge-fueled jumping-on point for the most devastating superhero saga in comics today. Bloodshot – and the child he’d do anything to protect – leap into the firefight of their lives when one of 2017’s most anticipated new series begins in full force in BLOODSHOT SALVATION #1 – featuring covers by Kenneth Rocafort (The Ultimates), Monika Palosz (DIVINITY III: STALINVERSE), Tomas Giorello (X-O MANOWAR), Ryan Bodenheim (The Dying & The Dead), Greg Smallwood (Moon Knight), and Dave Johnson (100 Bullets)! Plus: Valiant is rewarding fans who pre-order the most bloody and brutal new series of the fall with specially expanded, limited editions spanning BLOODSHOT SALVATION’s furious first year! Reserve the BLOODSHOT SALVATION #1–12 PRE-ORDER EDITION BUNDLE – available only as a pre-order set to fans who reserve the first year of BLOODSHOT SALVATION with their local comics retailer –  and get eight additional pages of specially expanded bonus content and extra features including creator commentary, behind-the-scenes looks at the creation of the comics, process character designs and artwork, and more at no additional cost with each issue. And that’s not all… As an extra-added bonus, fans who pre-order by July 27, 2017 will also receive the BLOODSHOT SALVATION #1 RAMPAGE REDUX – a FREE, LIMITED EDITION, and FULL-LENGTH COMIC BOOK – polybagged alongside the series’ first pre-order edition! Fans and retailers, take note: The only way to obtain the BLOODSHOT SALVATION #1-12 PRE-ORDER EDITION BUNDLE is to reserve this limited item with your local comic shop by the initial order date (IOD) of July 27th, 2017! No more copies will be made available beyond that date and subsequent issues – including the BLOODSHOT SALVATION #1 RAMPAGE REDUX bonus issue – will not be offered in later solicitations!